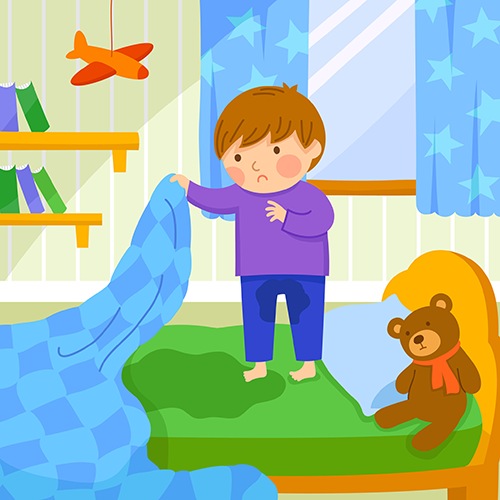 2. Desmopressina
Este segundo artigo contesta o uso indiscriminado da desmopressina na enurese noctura e é uma pequena aula de fisiologia do aparelho excretor. Under physiological conditions, a normal person produces urine within a circadian rhythm with urine production reducing during night-time sleep accompanied by a fall in night-time blood pressure (BP). Currently, a fall of 10% in night time values for BP is accepted as normal and is called the dipping phenomenon. The lack of this normally expected fall and even small changes in BP can cause significant variations in urine amounts (pressure diuresis). A pergunta que dá nome ao artigo é: Non-dipping phenomenon effects in monosymptomatic nocturnal enuresis treatment?  The response to desmopressin treatment was found to be significantly low in the patients who were non-dippers on 24 h ABPM before treatment compared to those with normal ABPM results (P < 0.05). Similarly, the waking problems in the non-dipper group were found to be high by a significant degree (P < 0.05). In the non-dipper group, the systolic non-dipping rate was higher. Conclusions: Before desmopressin use, assessment of patients with a 24 h ABPM may be beneficial to select the method to be used for treatment.

3. Infeções urinárias
Já saíram no início do ano, mas por alguma razão escaparam-me. São as as guidelines atualizadas da Sociedade Europeia de Urologia Pediátrica sobre diagnóstico, estudo e profilaxia das infeções urinárias. Update of the EAU/ESPU guidelines on urinary tract infections in children. This publication is a summary of the updated 2021 European Association of Urology guidelines on Pediatric Urology. A previous summary of these guidelines was published in 2015 [1]. The most important updates include the incorporation of additional risk factors for anatomic abnormalities in the diagnostic evaluation and an updated flowchart. Furthermore, alternative preventative measures for recurrent UTIs are highlighted.

4. Aniversário do cirurgião
Termino com esta notícia do Medscape: Patient Mortality Higher When Surgeons Operate on Their Birthdays. Patients who undergo procedures on their surgeon’s birthday are more likely to die within a month than those who have surgery on other days of the year, a new study suggests. In the analysis of nearly one million procedures, 2,064 performed on a surgeon’s birthday, the adjusted 30-day mortality for patients who had a procedure on the surgeon’s birthday was 6.9%, as compared to 5.6% when the surgery was on a different day, according to the report published in The BMJ.